“The devil is in the details” goes the idiom, and it must be the devil that’s kept me awake from time to time, tossing and turning while we think through the features we didn’t want to lose in our Pettit & Sevitt during this renovation and additions process.

Many people who have grown up in, built or purchased a Pettit & Sevitt home or similar “Sydney School” style built from the 1960s to late 1970s, will speak of a feeling or ‘vibe’ that that they love about the homes. Steve Jobs was famously influenced by the Eichler Home he grew up in, and I do think growing up in a certain environment does influence our thinking, even by osmosis.

For me, the interior of our recent bought P&S house always had a calm warmth which made living, waking and sleeping feel really comfortable. The outside, a lovely simplicity. The light at different times of day changes and brings a special quality with it through the large glass windows – quite a novelty for houses of the 1960s when we consider what else was being built. Our house also seemed ‘in concert’ with our native trees and northerly aspect. Honest materials of timber, glass, post-and-beam, painted brick are a far cry from much of the faux materials often used then (fibro) and now (timber-look ceramic tiles…what?).

For me, living this way has had a profound impact on our wellbeing and our way of thinking since 2011. We’ve never been conservative types, so nothing much has changed there. How you live, even if it’s not flashy, can have an important effect on your sense of ‘normal’. It’s also been great to see this topic emerge recently with Tim Ross’s ‘Streets of your Town‘ series on the ABC. Apart from Grand Designs (or Grand Disasters?) and lifestyle renovation competition programs, architectural discussion is a rare bird on Australian television, so I love hearing and seeing other people’s stories. When Tim returns to his childhood home to find it changed, but not all for the better, it felt like a stab to the heart. I could see his sadness and it radiated through my TV. Since then, I’ve thought a lot about the details, and of making sure we don’t kill the things we love even if we have to update other aspects for practical reasons.

Separately, I’ve detailed the P&S features in our house, partly for documentation purposes, and partly because I don’t want to forget the bits that need to be put back together when we replace the flooded plasterboard.

So this is our “house-print” – the homes we (my husband and I) have lived in. It’s a motley crew of Australian architectural history…!

My husband arrived in Australia as a 10 year old, and his parents – both professors of language – worked at Sydney factories. Such was the reality of migrant life and the Australian resistance to recognising overseas qualifications. Despite this, being happy to arrive in a peaceful country, they worked and bought their first home in Sydney’s suburbs within a few years. So my husband grew up in a fairly typical early 1900s weatherboard house on a large block. With an outdoor toilet of course…until Gough Whitlam came to power, much of Sydney did not have internally connected sewerage.

Several such homes these days would be coveted in places like Sydney’s Northern Beaches, and they can be great places to renovate if they haven’t been devoured by termites. Timber, at least, is suitable material for our climate, often topped by a zincalume roof. No insulation to speak of in those days, summers were hot and winters were cold.

My husband and his brother replaced the roof in the 1990s and extensions to the house tended to be built from fibro. Air-conditioning was added. It was small, and normal and housed 5 people during those years. A lot of Australians have grown up this way. Friends of ours in Parramatta lived in similar versions and some had old stained glass windows – that was considered very fancy to a 10 year old like me!

My husband’s Danish neighbour – Mones – who lived across the road had fastidiously restored their weatherboard cottage right down to making their own Danish furniture…it was beautiful, and “scandi” before I even knew was scandi meant… and a bit cool to me. I always dreamed of having something made by Mones as he’s an amazing carpenter.

I grew up in an early 1980s project home in Sydney’s northwest. A new subdivision surrounded by display homes – of which ours was one, and cows. It was typical of the pastiche of Australian architecture which would continue into the 1990s, and is evident in some ‘McMansion’ designs today. It was a single storey blonde brick and tile home with large floor to ceiling windows (a plus), crazy arches for no particular reason inside, green shag pile carpet, green kitchen and …a massive bar in the middle of the lounge room!

This was the centre of all family entertaining through my childhood…and I’d have to say, it was one of the better functioning ‘features’ of the house. The bathroom was 3-way with shower, toilet and bath all being separate…somewhat of a luxury. It had a study and double garage. It was firmly middle class and very comfortable over the years. It was an enormous step up from the apartment my parents first settled in, and the subsequent post-war fibro square-shaped rental house…also a very common experience for many Australians.

The generous windows did make it hard for a teenage girl to get just the right bedroom set up. There was basically only one way you could have the bed, whereas I quite liked moving furniture around regularly. (Remember, no social media in the 1980s..there wasn’t much else to do except ride my friend’s racing bikes or my brother’s hand-me-down dragster bike, walk the dog or go over to my cousin’s house). I distinctly recall the presence of an incinerator for newspapers every week, at least until that became illegal. 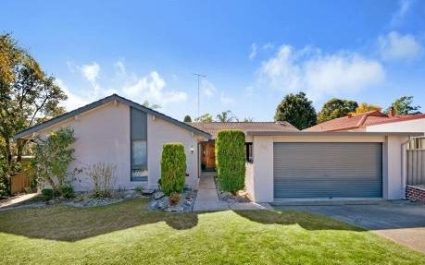 And over the years the lovely tall trees grew up around the house. 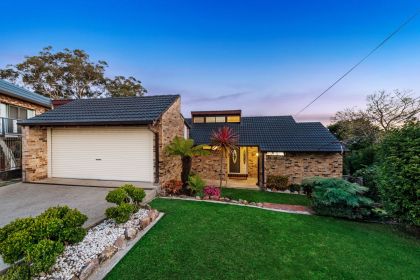 There were a few homes in the neighbourhood like these ones to the right – they reflected P&S ideas with post-and-beam features, stanting roof lines, floor-to-ceiling Stegbar windows and split-level floor plans while they were mostly presented in red/brown or blond brick with timber cladding in featured areas.

One of my friends lived in such a house and it had downstairs ‘rumpus room’ with a pool table, leather sofa and TV. The ultimate den – I thought it was pretty cool.

It was thoroughly middle class and it felt fortunate to be so. 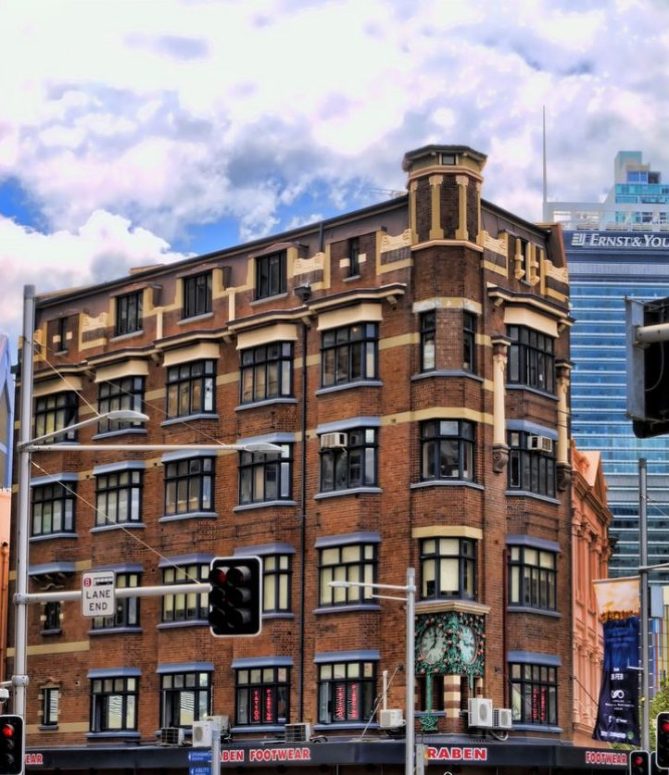 During the 1990s my husband and I lived in a unique urban setting: George Street Sydney. Five minutes to University in one direction and to part-time work at Myer (for me), in the other. This was a time when no one really lived in the city. Darlinghurst and Surry Hills weren’t far away but no one lived on George Street. The growth in apartment buildings had not started yet, and the only real place to buy groceries was Paddy’s Market (can’t complain) and Chinatown but it was an exciting time and we lived on the 4th floor of the Kings Disposal’s building among a community of architects and creatives who are our dearest friends to this day, and famous in their own right.

Apart from the noise (3am ambulances, a steady flow of trucks, and late-night ruckus from people leaving pubs), the building itself was very old-world Sydney. It had one of the oldest elevators in the city, which we operated manually. And beautiful very high, pressed metal ceilings. Bay windows and timber floors were the other main features. There was a bedroom and we put in a kitchen and 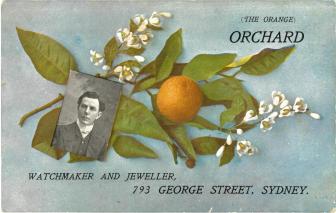 It wasn’t ours to keep but the rent was so affordable and our lovely landlords, the King family, were happy for the improvements as it had been empty for years. For the most part, it was pretty comfortable, the sunlight was wonderful through the large windows and it was a great studio space. I can’t remember it ever getting too cold because we were high up. Dragging Gyprock up 4 steep flights at nighttime however was, well – tricky but we were younger and strong enough. Originally known as Orchard’s Corner after Richard Orchard, the bottom floor had glass jewellery windows which originally descended into the basement.

We had seven great years in the city and when the building was sold we made the decision to buy our first home. 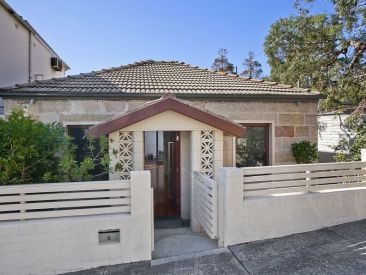 The time was right and rents were freakishly similar to a small mortgage. So we took the plunge in Balmain after many weekends thinking “will we find anything we’ll be able to afford” ?!

It was a stone cottage, typical of the area, and tiny. It had timber floors and a blue 1960s bathroom and equally blue kitchen.

Needless to say we loved Balmain and would today as well. But it’s fair to say, this house and styles like it were totally impractical for Sydney’s climate. As one of the earliest Balmain cottages, it was solid stone…so solid the house never warmed up. In summer, we did manage to get good cross ventilation front to back. It was also tiny, 120 sqm including the land. Improving with stone would be expensive for a second storey. The house was one of the last single storey homes in our street, yet local council would not approve an upper level (which had views to the Harbour Bridge…sigh). In all other respects it was conventional. There were no built-in robes, and no parking. A kitchen which was oddly shaped. Barely any storage to speak of except for what we brought with us: bookshelves and stand-alone wardrobes, a sofa and dining table. It was all we needed, and we could afford it!

I still consider myself a Balmain girl at heart. We moved eventually due to lack of space, but this area of Sydney was our favourite. Alas, just not in terms of architecture. Filled with stone homes of the British variety which are totally impractical for Sydney weather, and workers cottages desperate for termite protection…the north shore was beckoning and it’s hard to compete with the wonderful greenery of the north side, space, and mid-century through to P+S homes, Siedler masterpieces and more. 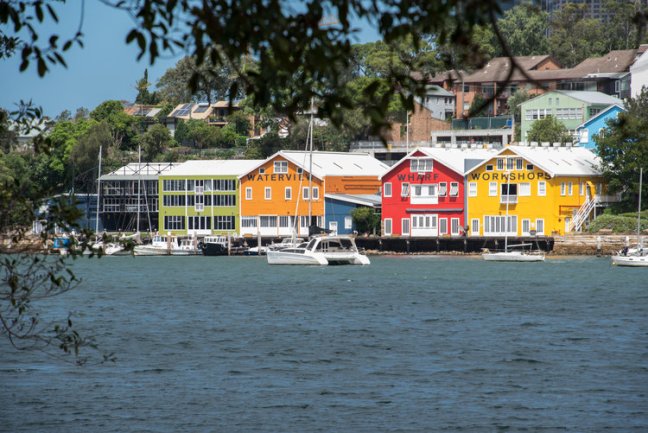 2 thoughts on “A brief history of our “house-print””